Ceiling fans are a great way to cool the air in a healthy way. In addition, they add a decorative touch to the room and even provide light. But choosing a ceiling fan is not always easy.

At Faro Barcelona, we have been selling ceiling fans for more than 75 years and we are aware that buying a fan is an important choice. This appliance has a long life and the price, although it is quite affordable, it is normal that you ask yourself some questions before installing one at home.

Issues such as the height of the ceiling, the size of the room or the slope of the ceiling can influence the choice of fan. Therefore, we leave you with a guide with the best tips on how to choose the ideal ceiling fan for the room you are looking for. 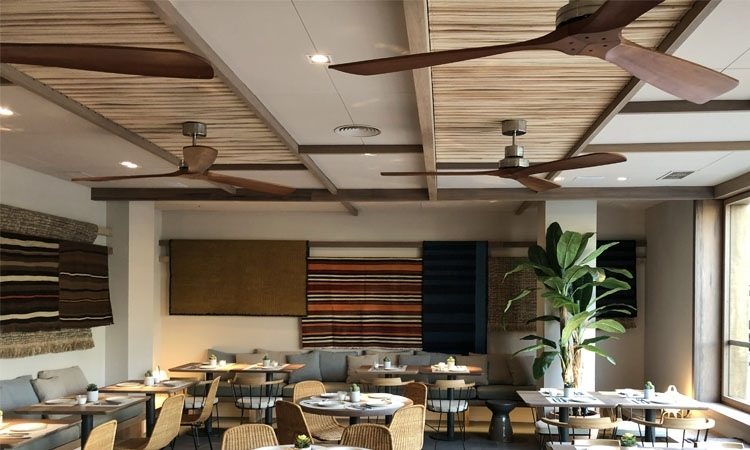 Which type of fan to choose depending on the room?

When considering how to choose a ceiling fan, it is most important to consider the area to be ventilated, the square footage of the area, the ceiling height, the location and the ambience of the room.

Which fan size to choose

Indoor fans can be used in all rooms of the house and therefore we have to take into account the size of the space where we want to install it. 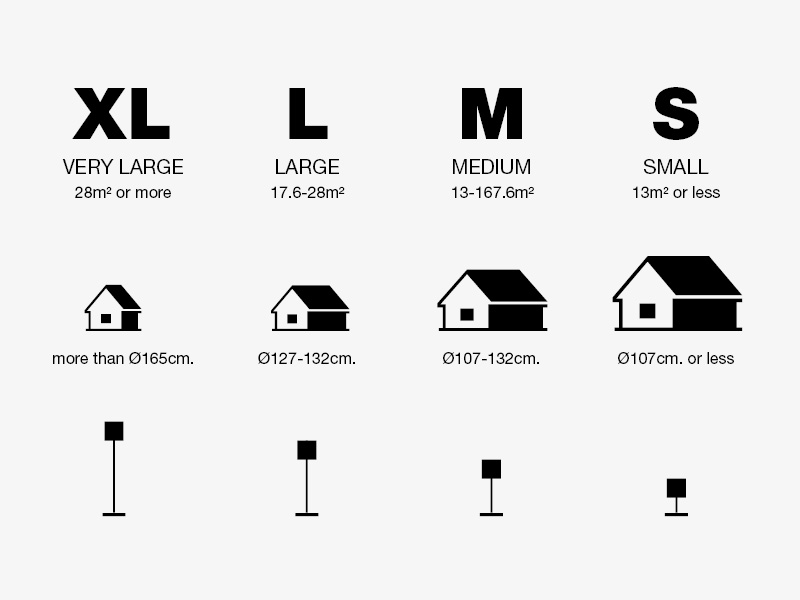 Although the tendency is always to choose small fans for fear that they will stand out too much, it is always advisable to choose slightly larger models, as longer blades mean that, with a much slower movement and more air moved.

A small ceiling fan, on the other hand, needs a higher speed to produce the same breeze, and it is precisely this speed that will make it stand out rather than go unnoticed. However, this will depend on the size of the space in which it is placed.

Fan with or without light

Some ceiling fans also have the option of including a light.

For outdoor spaces such as terraces, entrances or porches, it is very important that the fan is IP44 rated so that it is prepared for environmental adversities such as humidity, dust, weathering or splashing.

Although many people tend to think that the more blades, the cooler, this is not true. The number of blades on a ceiling fan does not have much influence on its performance, but is more a question of aesthetics.

Another of the most important questions when considering how to choose a ceiling fan is the design, finish or colour.

In any case, the fan must fit in and integrate into the space like any other decorative element, so these characteristics must be, in some way, in line with the general style of the room in which it is placed.

In addition, it should be borne in mind that some materials need more care than others, although they are all designed for minimum maintenance.

If you want to install the fan on a sloping roof, such as a dormer or a porch, you must take into account that:

In any case, installation is the same as when the ceiling is not sloped, just adjust as needed. Make sure that the fan is far enough away from the ceiling so that the blades do not touch it.

For example, the ICARIA, LUZON and LANTAU models are suitable for sloping roofs.

Which motor (AC/DC) is most suitable for the ceiling fan?

Ceiling fan motors can be of two types:

Faro Barcelona ceiling fans incorporate DC motors, as they are high-end products. More information about AC/DC motors in this article. 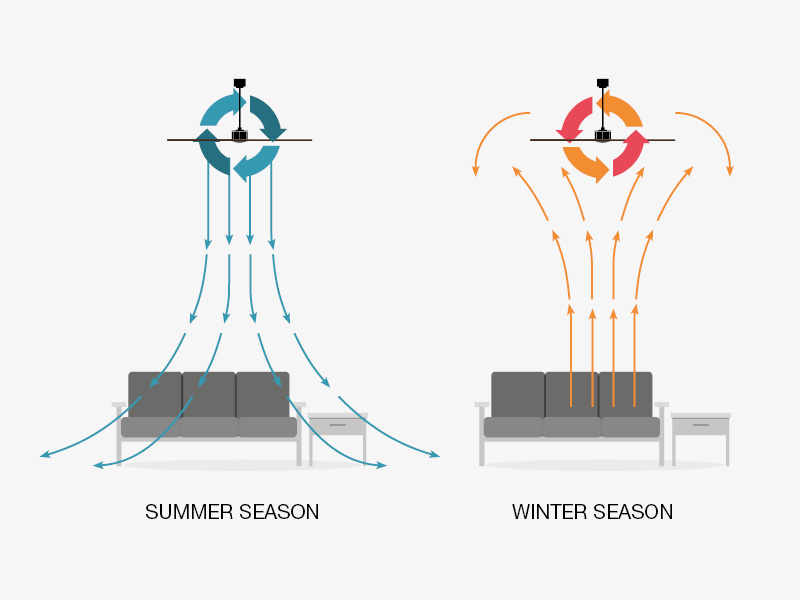 Ceiling fans are an effective way to reduce energy costs all year round and create a pleasant atmosphere, thanks to the reverse function, which is available on fans with DC motors.

In our catalogue you will find some models with reverse summer-winter function. You can identify them by the sun and snow icon.

Consumption of the ceiling fan

The power consumption of a fan depends on three main factors:

Control options for a ceiling fan

There are three ways to control a ceiling fan

Our catalogue identifies which type of control system each fan has. Some models are operated by remote control and chains, and others via a wall switch.

It is important to mention that the remote controls allow up to 16 frequency combinations and can be adjusted by remote control. Each fan must be assigned a different frequency to operate autonomously.

Each space requires an appropriate range of fan rotation speeds.

How to install the ceiling fan

Install on a normal roof

For proper operation of your fan and proper air circulation, we recommend:

This is the minimum distance to ensure optimum air movement. If the room is smaller, we recommend fans that can be installed directly to the ceiling.

They could be placed lower if placed in areas such as above a dining table or bed, where the risk of collision with the fan is minimal. It is also essential that the ceiling where it is installed is strong. 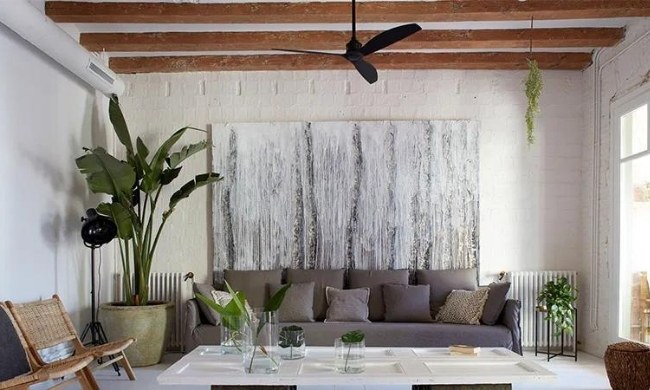 Installing a ceiling fan on a high or pitched roof

As ventilation experts, we recommend placing the fan at a height of 2.8 metres if a high ceiling is involved. At the same time, there should be at least one metre between the fan and the next object (e.g. a piece of furniture). To do this, use the extensions on the stems.

In the case of a sloping roof, look for fans that are suitable for this and respect the maximum angle of 20°.

Who should install the ceiling fan: private individual or specialist

If the instructions detailed in our manuals are followed, the installation of the fan should not be a difficult task. However, like any other device that requires electrical installation, it is recommended that the installation be carried out by a specialist.

Maintenance of the ceiling fan

The ceiling fan does not require too much technical maintenance. Just keep in mind that the use of water for cleaning is not recommended, as it can damage the motor. The fan should not be lubricated either. The motor has permanently lubricated bearings. Our recommendation is to use a soft cloth to avoid scratching the finish.

If the roof-mounted fan is inactive for a long period of time, disconnect the power supply to avoid an electrical overload of the components.

After a long period without switching on the fan, it is advisable to check the connections, the screws, the fixing of the support to the ceiling and that all the blades and their supports have the same or similar inclination. 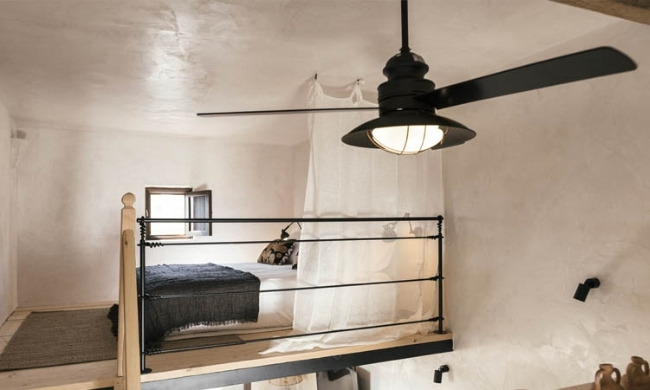 Benefits of the ceiling fan

Ceiling fans are a healthy form of ventilation that is not only limited to homes, but is also quite useful in spaces such as offices, restaurants and even the retail sector.

The fact is that the use of ceiling fans does not lead to a real drop in temperature, but they do increase the sensation of greater coolness.

Improve the ambience of each space

In the kitchen. A space with more than one window and an extractor fan will help to remove bad smells or smoke.

In the dining room. It is one of the most furnished spaces in the house. When choosing the fan, it is good to consider what material it is made of and what colour it is to create a unique atmosphere.

Bedroom. Quiet fans with DC motors are ideal fans for the bedroom because of their low power consumption, the low noise they emit and the soft breezy air they provide. Don't let the high temperatures spoil your nights! 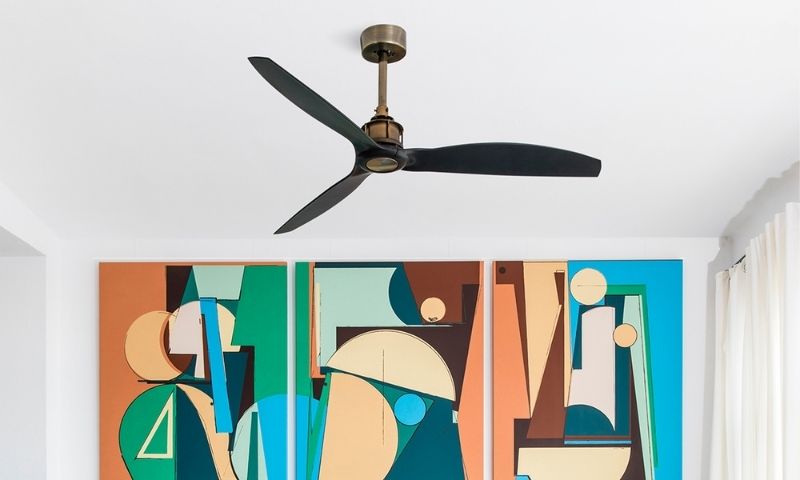 One of the products that best adapts to different types of installations is the Just Fan ceiling fan model. With several models in different colours and finishes, Faro Barcelona's own design, DC motor and up to 6 adjustable speeds, it is the perfect ceiling fan for any interior location and for all types of styles. 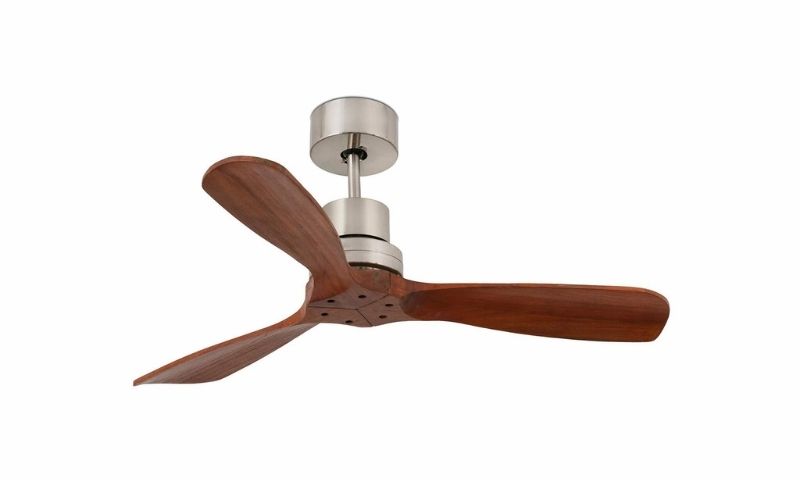 Modern ceiling fan with a striking and striking design, ideal for the ventilation of rooms from 17.6m2. Steel motor and wooden blades. It has 3 adjustable speeds. This fan has a reverse function, so you can also use it in winter to improve the efficiency of your heating system. 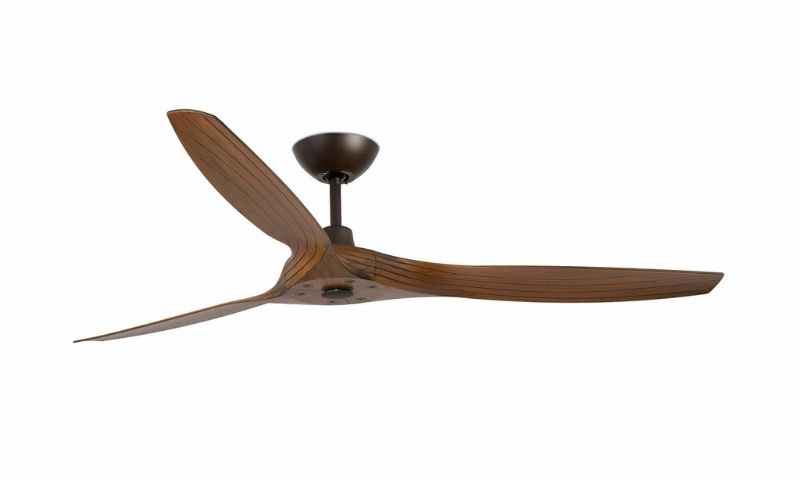 Ceiling fan suitable for sloping ceilings with DC motor. With modern lines, it is ideal for rooms from 17m2. Wooden blades finish. It has 5 adjustable speeds 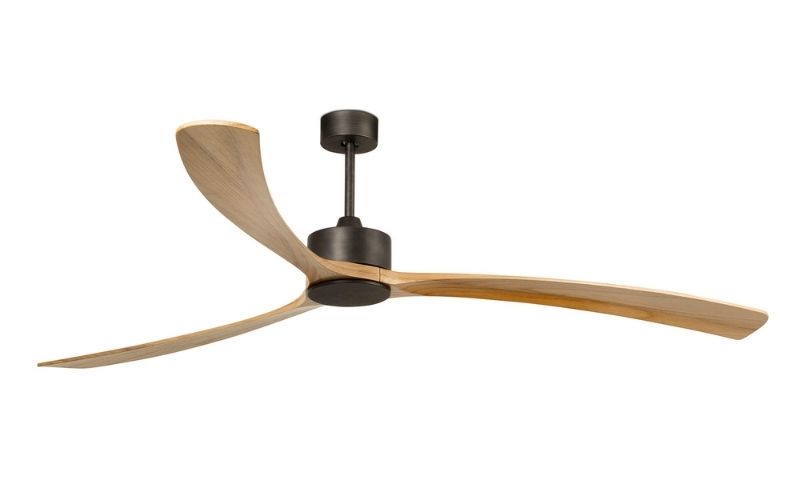 KAUAI is a long brown ceiling fan ideal for spaces from 28m2. With a simple and timeless design, this fan with DC motor is operated by remote control with programmer. It has 6 adjustable speeds and a reverse function. It also features SMART FAN technology, which allows you to control it with the WiZ app, Alexa, Google assistant and Siri. 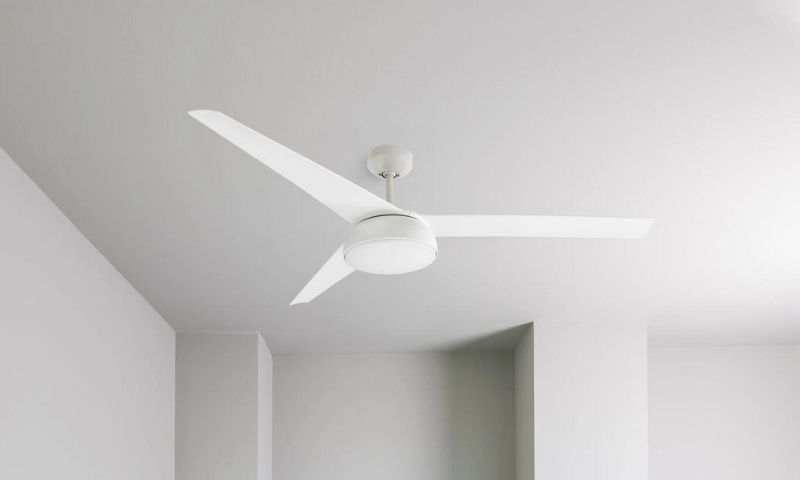 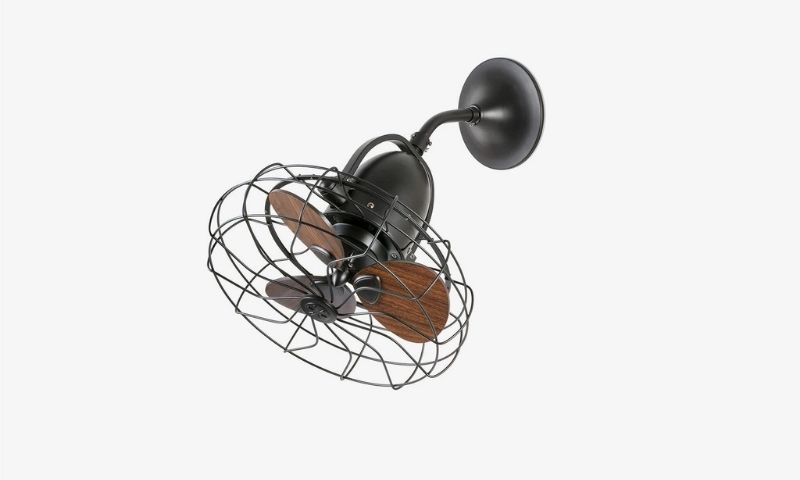 KEIKI is an industrial and retro style ceiling fan, ideal for rooms of less than 13m2. Operated by a wall-mounted regulator, included. It has 3 adjustable speeds and a reverse function, so you can also use it in winter.

Other questions about the ceiling fan

How much air do the fans move?

There is a direct relationship between the amount of air and the comfort provided by the fan.

What kind of warranty does a ceiling fan have?

Faro Barcelona ceiling fans are guaranteed for 15 years for damage to the motor and 2 years for other parts of the unit. Light bulbs are not considered part of the fan.

What does RPM indicate?

In our catalogue, you can see the RPM of the fan followed by the symbol "RPM".

You have already seen that a fan is a very important element of the house and it is essential to choose the one that best suits you. At Faro Barcelona you can find the widest and most varied range on the market. With all kinds of ceiling fans suitable for indoors, outdoors and different ceilings. We are sure you will find the perfect fan for your project.

We also provide you with an e-mail address to resolve any doubts and questions you may have about ceiling fans: ventilacion@faro.es (no incidents or complaints will be dealt with via this e-mail address). 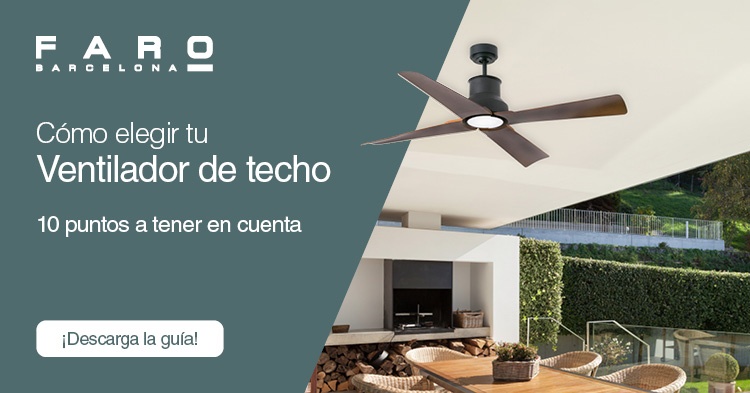